Section Five - What is technosolutionism?

A story about a new version of PacMan (16 minutes)

“TECHNOLOGY DOES NOT SOLVE PROBLEMS; PEOPLE DO” – KENTARO TOYAMA

Technology is often used to solve some kind of problem. Sounds good, but do you really know what the problem is? Are you solving the real problem or only addressing the symptoms? Or maybe you only think something is a problem? That is why it is so important to make a crisp and clean description of the problem you want to solve.

The easiest way to do that is just ask the ‘why’ question a few times. This often leads to a discussion about the problem and that helps in your design of your technology and finding out if (a certain) technology is really a solution to the problem. But it sounds easier than it is. Let's do a short excercise and see if you can find the 'problem behind the problem.'

You are a member of city council. Your city is considering implementing a new parking solution called SP4U. But is this new technology solving the right problem?

The more powerful technology becomes the more tempting it becomes to solve problems with technology. This can be dangerous. The idea that anything can be solved with technology is called solutionism or technosolutionism by Evgeny Morozov in his book To Save Everything Click Here. In this interview (6 minutes) he explains what he means by (techno)solutionism.

So, solutionism is the idea that technology has built an infrastructure for solutions and now it is looking for problems. Only, technology needs to frame the problem in such a way that it can be solved. So, for example, obesity is a very complex problem that concerns biology, socio-economic issues, information, education, way too cheap sugary food and so on. However, you can also frame it as a problem of people that excercise too little and eat too much. In that case you can build an app that tracks movement and calories. Problem solved.

Sounds easy, but let's see if you can do this in the following excercise.

You are given the opportunity to design a better SP4U - app. You have been inspired by Mr. Morozov. Can you do it?

Okay, so now we now a little bit about trying to find out what the real problem is and we are warned against technosolutionism. Are we ready to design, assess or invent technology that leads to a better world? Probably not. We used to want things, but we were unable do them. Now we can do almost everything, but should we want to? And perhaps an even more important question, do we know what we want?

We want to create a better world with technology, but do we really know what better is?

As stated before, we know asking a question like this is a luxury. Still, this question is important. A great example of this is Freeman by Koert van Mensvoort. In this game (see also section 7 if you want to play), you can play Pac-Man, but in an “ideal” frictionless and safe world. There are no mazes, all ghosts are locked up, there are unlimited cubes of food, level by level by level by level. Is this really better? Is this what we strive for? 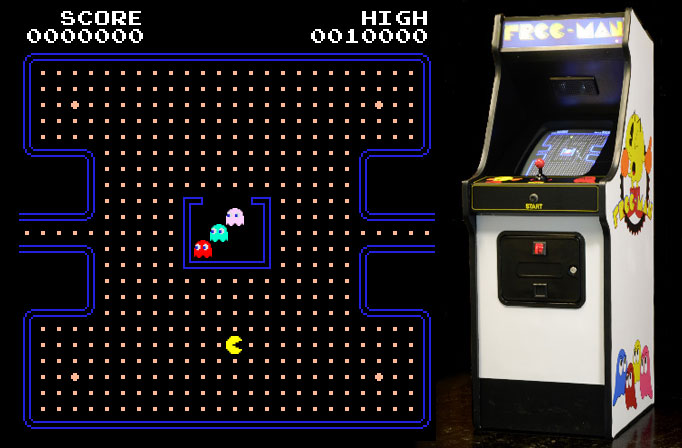 (Image of Freeman on Mensvoort.com)